The Cookbook Collector: A Novel

Emily and Jessamine Bach are opposites in every way: Twenty-eight-year-old Emily is the CEO of Veritech, twenty-three-year-old Jess is an environmental activist and graduate student in philosophy. Pragmatic Emily is making a fortune in Silicon Valley, romantic Jess works in an antiquarian bookstore. Emily is rational and driven, while Jess is dreamy and whimsical. Emily’s boyfriend, Jonathan, is fantastically successful. Jess’s boyfriends, not so much.

National Book Award finalist and New York Times bestselling author Allegra Goodman has written a delicious novel about appetite, temptation, and holding on to what is real in a virtual world: love that stays.

Look for special features inside.
Join the Circle for author chats and more.
RandomHouseReadersCircle.com

Allegra Goodman on The Cookbook Collector

Allegra Goodman’s novels include Intuition and Kaaterskill Falls. Her fiction has appeared in The New Yorker and Best American Short Stories. She is a winner of the Whiting Writer’s Award and a fellowship at the Radcliffe Institute for Advanced Study. She lives with her family in Cambridge, Massachusetts. 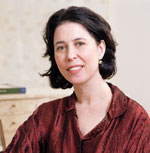 When I began my first novel, Kaaterskill Falls, the writers I admired most were Jane Austen, George Eliot, and Charles Dickens. These novelists managed to write brilliantly about character and also about community. What I loved about these artists then and now is the way they interleave points of view to explore human relations in all their complexity. Love, hate, self deception, hope, jealousy, ambition, admiration–so many feelings play themselves out in 19th-century plots. Of course, each of these iconic authors has a unique style. Imagine these three as Old Master painters. Dickens is Bruegel with his lively, detailed gatherings. Eliot is Rembrandt, illuminating her characters from within. Austen is Vermeer with her exquisite control, her limpid intelligence, and her fine wit.

To have a relationship with the past means to give and take, to enter a conversation with those who came before you, but also to maintain a dialog with the writers and readers who live now. Therefore, with each book, I’ve developed new inspirations. Tolstoy inspired me when I was writing The Cookbook Collector. I was fascinated by his use of dialog, his use of history as both subject and medium, his panoramic scope and his multiple points of view. The rhetoric of the dot-com era inspired me with its futuristic, almost messianic language. The novelist Kazuo Ishiguro inspired me, because his work is so powerful and so subtle at the same time. And the language of early cookbooks inspired me. I began to meditate on the purpose of recipes for food, for potions, for poultices, for great occasions and ordinary meals. Studying early cookbooks in the Schlesinger Library, I began to meditate on the difference between cooking from a recipe and improvising in the kitchen. This becomes a central question for Emily and Jess, the sisters in The Cookbook Collector–should I seek out rules, or make up my own formula for how to live?