Modern Sauces: More than 150 Recipes for Every Cook, Every Day

This is the book for cooks who want to take their cooking to a whole new level. Martha Holmberg was trained at La Varenne and is an award-winning food writer. Her look at this sometimes-intimidating genre—expressed in clear, short bites of information and through dozens of process photographs—delivers the skill of great sauce-making to every kind of cook, from beginners to those more accomplished who wish to expand their repertoire. More than 100 recipes for sauces range from standards such as béarnaise, hollandaise, and marinara to modern riffs such as maple-rum sabayon, caramelized onion coulis, and coconut-curry spiked chocolate sauce. An additional 55 recipes use the sauces to their greatest advantage, beautifying pasta, complementing meat or fish, or elevating a cake to brilliant. Modern Sauces is both an inspiration and a timeless reference on kitchen technique. 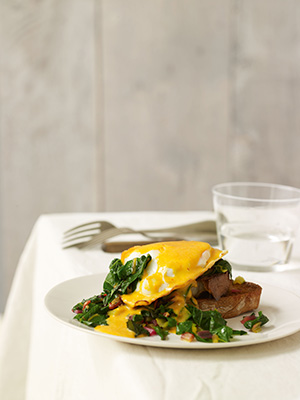 Here is another recipe created by my friend Matthew Card. It’s a riff on eggs Florentine (eggs Benedict but with spinach instead of Canadian bacon or ham) and, like every dish he makes, it is turbocharged with flavor. It would also be delicious with any of the other sauces in this chapter, so feel free to experiment.

Avoid using a hard-crusted bread here. If you can’t find focaccia, substitute something tender and flavorful, such as brioche or a soft Italian loaf. Peppadew peppers, which originated in South Africa, are sweet, tangy, and only modestly hot. They are pickled and sold in jars in the deli section of well-stocked grocery stores.

Bring a large pot of salted water to a boil. Add the chard leaves (not the stems) and cook, stirring occasionally, until just tender, 3 to 5 minutes. Drain, rinse well with cold water, and squeeze out as much excess water as possible. Chop coarsely and set aside.

In a large frying pan over medium-high heat, heat 3 tbsp of the olive oil over medium-high heat. Add the chard stems and a large pinch of salt and cook, stirring occasionally, until tender and lightly browned, 6 to 9 minutes. Add the garlic and Espelette pepper and cook, stirring, until very fragrant, about 30 seconds. Stir in the cooked chard leaves, roasted pepper, and Peppadew pepper. Cook, stirring often, until the flavors are blended and the chard is hot, about 2 minutes. Transfer to a medium bowl and cover to keep warm. Do not rinse the pan.

Break each egg into a small teacup. Return the frying pan to low heat and add the remaining 1 tbsp oil. Carefully slide the eggs from the teacups into the pan so they stay whole. Season them with salt, cover the pan, and cook until the eggs are just set, 2 to 3 minutes.

Place a piece of focaccia on each plate, divide the chard mixture evenly among the focaccia, top with an egg, and then spoon a generous blanket of the warm hollandaise over the top. Serve right away.